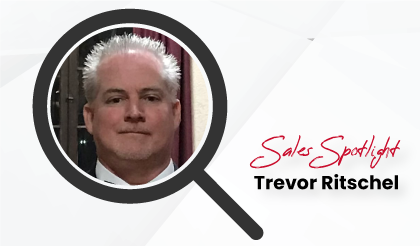 Meet Trevor Ritschel, our Regional Sales Manager covering the states of Idaho, Montana, Oregon, and Washington. Trevor has been with Fullerton for almost a year and supports our products with distributors and end users.

Trevor grew up and spent the first 44 years of his life in Southern California, in Newport Beach and Huntington Beach areas. He grew up surfing and skateboarding up and down the Orange County and San Diego County beaches. He would also take half day fishing boats out of Newport Harbor to go fishing as much as possible.

Trevor has spent the past 6 years living in Tigard, Oregon (which is about 20 minutes outside of Portland) with his wife of 25 years, Michelle, and their 17 year old son, Travis. His daughter, Vannessa, her boyfriend, and their children/Trevor's grandchildren, Chelsea and Mathew, have moved just a couple miles away from them. Trevor and his wife enjoy having all the family over for backyard BBQ's and games. Trevor enjoys shooting and getting some lake fishing in when I can.

If you could spend a day in someone else's shoes, who would you choose and why?
Benjamin Franklin - I am really interested in American History and our Founding Fathers.

What is the strangest talent you have?
I have a knack for building things or putting things together. I am constantly fixing or changing things around the house.

What is one thing still on your bucket list?
I would like to go to Washington DC and visit the monuments and all the Masonic monuments.

What would you do (for a career) if you weren't doing this?
I would probably still be an auto mechanic.

What's your favorite thing about working for Fullerton?
What I really enjoy about working for Fullerton is the "Family Environment" here. Everyone is very welcoming and helpful! Everyone is very accessible, from the President and upper management through the extremely helpful custom service and shipping department. Everyone here pitches in to help get the job done whether its in their "job description" or not. Fullerton has a very tight team of extremely knowledgeable and experienced people. 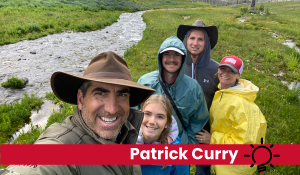 There are some people here at Fullerton who need no introduction and our President, Patrick Curry is one of those people. He's well known amongst the cutting tool industry as well as our community, but I thought he'd be a great person to learn a little more about in this month's sales spotlight.

Patrick was born and raised in Saginaw, Michigan.  He grew up hanging out with his dad at work on Saturdays and has spent 30 years working here at Fullerton. As a kid, he'd caddy for his dad and Dick Terry during Fullerton's golf league. In 1989, Patrick started working at Fullerton in the steel department doing piece work and eventually moved to engineering (where there may still be a few of Patrick's auto cad tool drawings in the system). Throughout time, Patrick moved to the estimating department, became the office manager, and in 2002 moved into sales and became Vice President for Fullerton. In 2006, he became involved in international sales, and in 2008 he became President. Patrick truly loves this industry and manufacturing; he serves on several State and National boards that focus on manufacturing and local economic development.

Patrick went to Central Michigan University, graduating in 1993 with a BSBA in Industrial Engineering. While there, he met the love of his life Jenny in a business fraternity and the two have been married for the past 26 years. They have three children, Greyson (24), Aidan (22), and Isabella (13). They also have a silver lab named River and a tabby cat named Royal. They attend St. Peter Lutheran Church in Hemlock, Michigan. Patrick also enjoys attending a men’s Bible study group with a few co-workers and local business associates. Patrick also is a major sports fanatic thanks to his dad's influence and is a huge outdoorsman absolutely loving to fish, hunt, golf - especially with family and friends.

What song title best describes your personality?
Walk by Faith, Jeremy Camp or Easy (Like Sunday Morning), by Lionel Richie

What's the weirdest job you've ever had?
Canoe Livery Boy

If you could spend a day in someone else's shoes, who would you choose and why?
George Washington, to be a part of history.

If you could win an Olympic medal for any sport, real or rake, what would it be?
Ice Hockey.

What's the nerdiest thing you do in your spare time?
I read boring manufacturing books and magazines about the cutting tool industry.

What's the strangest talent you have?
DJ for family and friends events and sports announcer for hockey games.

What is one thing still on your bucket list?
Ski Diving & Scuba Diving.

What would you do (for a career) if you weren't doing this?
Big Game and Fishing Outfitter.

What's your favorite thing about working for Fullerton?
My favorite thing is our people and our customers. We have great talent and passion in both both and they are both very inspirational to me and my family, the grit, the courage and commitment to succeed is infectious. 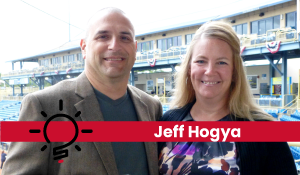 Jeff began working in a machine shop straight out of high school after completing 2 years of vocational shop while attending high school. Jeff spent 24 years running machines, programming, and designing tools. From the shop, he went to work as a sales representative and application specialist for a cutting tool manufacturer. He then moved on and became a sales manager and cutting tool specialist for an industrial distributor. In 2019, Jeff joined the Fullerton family and continued helping customers at the spindle.

Throughout his career, Jeff also worked as a part time firefighter for 33 years before retiring as Fire Chief in 2017. He has 2 sons and 2 grandchildren. He and his wife, Laurie, recently celebrated their 30th wedding anniversary and are currently empty nesters.

What's the weirdest job you've ever had?
I was a ticket agent for Greyhound Bus Line

If you could spend a day in someone else's shoes, who would you choose and why?
My wife's, so I could better understand the trials and tribulations she goes through in a day and be more compassionate when she brings up issues.

What's the nerdiest thing you do in your spare time?
Help my wife do her crafts.

What is one thing still on your bucket list?
Driving a Nascar race car.

What would you do (for a career) if you weren't doing this?
Firefighter. 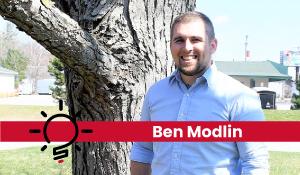 We're excited to introduce you to our estimator, Ben Modlin!  He works hard to provide quotes on standards, altered standards, and specials in a timely manner.

Ben has been with Fullerton for 6 years and has previously worked in our Raw Materials department as well as Customer Service.

Ben is married to his high school sweetheart, Alexis and they are have been married for 9 years.  They have 4 wonderful children, Luke (7), Logan (5), Marielle (3), and Evan (1).  Ben loves to be outdoors whenever the weather decides to make that enjoyable.  He loves to camp, kayak, and spend time around a good fire.  He is a devout Christian and holds dearly to his faith - his life would not look like it does today without it.

What song title best describes your personality?
I'm a Daddy and I Know It.

What's the weirdest job you've ever had?
I wouldn't call it weird per se, but I spent two years working for Stanley Steemer.  People and their animals can be quite disgusting.

If you could win an Olympic medal for any sport, real or fake, what would it be?
Eating pizza!

What's the nerdiest thing you do in your spare time?
When I have time, which is rare, I really enjoy a good book.

What would you do (for a career) if you weren't doing this?
I think it would be awesome to own a campground.

What's your favorite thing about working for Fullerton?
I love the family atmosphere that has been established over the years.  To be part of a company where everyone is treated like family is definitely special.  Fullerton's love for its employees and our love for one another sets our company apart from all others. 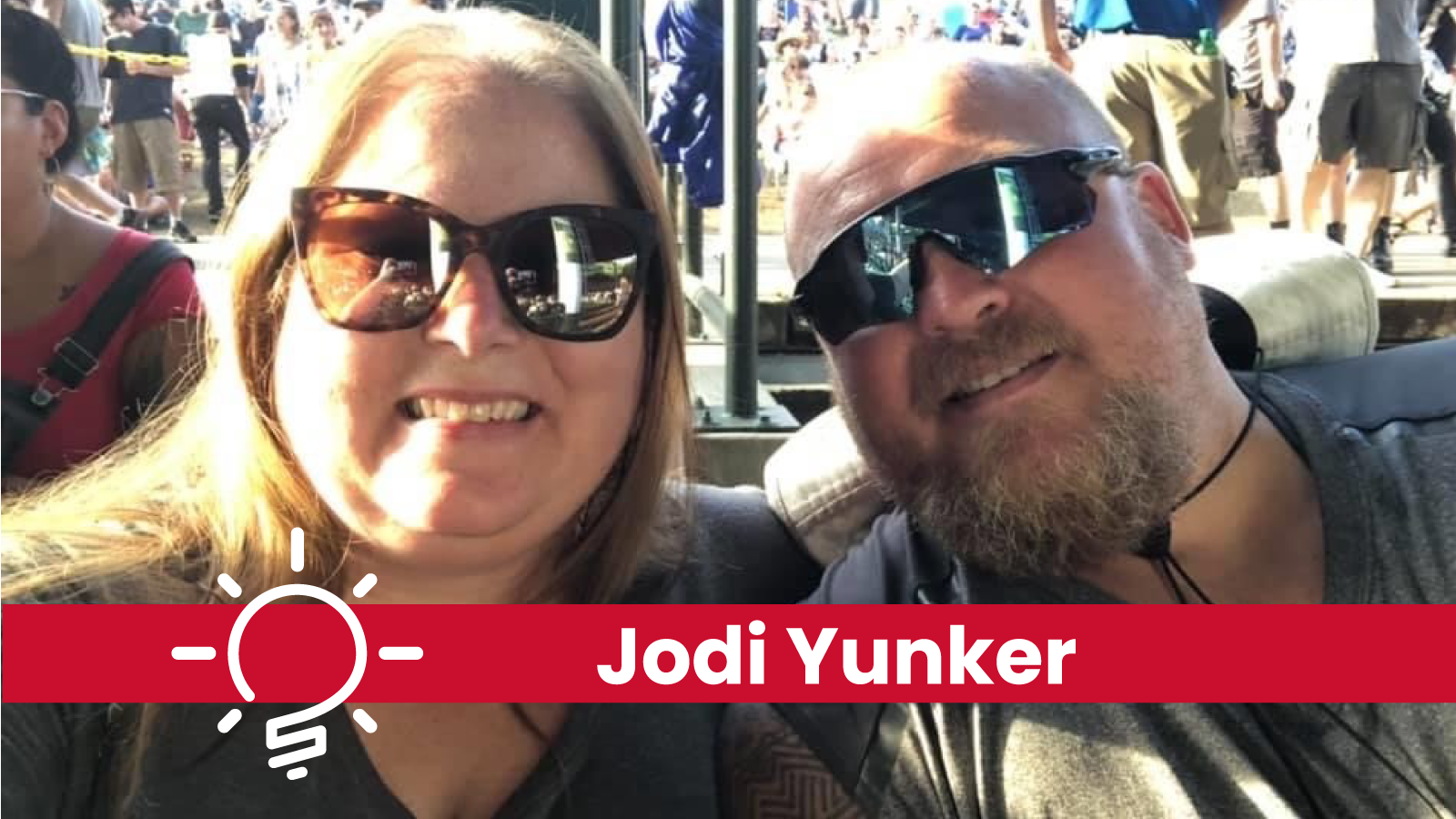 We're excited to introduce you to our Customer Service Supervisor, Jodi Yuncker!  Jodi supervises the entire Customer Service team and also gets hands-on to help customers with their needs.

Jodi has been with Fullerton for 23 years and has held numerous roles throughout the organization, some include receptionist, quoting, customer service, and training the staff at our California warehouse.

Jodi and her husband love music and love going to concerts with friends.  Jodi also enjoys going to her family cottage with her husband and pups.  She enjoys boating, canoeing, swimming, paddle boarding, you name it, she loves it.  Jodi also spends a lot of time with family and friends.  But if you know Jodi, you know she absolutely loves her pups and she thinks it the best thing she ever did was get them.

What is your favorite band?
Pearl Jam

What is your favorite lyric?
Oh, dear Dad, can you see me now?
I am myself, like you somehow
I'll ride the wave where it takes me
I'll hold the pain, release me

What's the weirdest job you've ever had?
Dishwasher

What is the craziest/most daring thing you've ever done?
Swam with sharks

If you could win an Olympic medal for any sport, real or fake, what would it be?
Curling

What is the dumbest way you've been injured?
Taking out the garbage and slipping on wet wood and breaking my leg and ankle.

What movie can you watch over and over without getting tired of?
Almost Famous and Elf

What is one thing still on your bucket list?
Visit Ireland

What would you do (for a career) if you weren't doing this?
Tornado Chaser/Meteorologist